Yacht charter Bahamas: general area information for yacht charter and crewed charter in Bahamas – Here you will learn more about location, history, economy of Bahamas as well as interesting facts and sights of Bahamas. You will get information about sailing in the Bahamas like wind & weather and tides. Furthermore you will find sailing info as well as price lists and a picture gallery for your sailing trip on the Bahamas.

The area Yachtcharter Bahmas is located about 80 kilometers south of Florida and 100 kilometers north of Cuba.

The Bahamas are located in the North Atlantic, 80 km southeast of Florida and 100 km north of Cuba, with a north-south extension of 650 km and east-west latitude of 750 km. The highest point is Mount Alvernia (63 m) on Cat Island, on whose summit stands a monastery.

It was not until the 9th century that the Lucayan, a South American Indian tribe, permanently settled some of the more than 700 islands, of which only 30 are permanently inhabited even today. In 1492 Columbus discovers the Bahamas, which are claimed and colonized by England in 1629. For a long time, pirates use the area as a hideout. During the American War of Independence and the Civil War, as well as during Prohibition, the islands serve as a refuge and hub for contraband due to their proximity to the United States.

The Bahamas gained independence in 1973, the official language is English, the currency is the local dollar and the equivalent US dollar. Due to the lack of natural resources, the economy is strongly focused on tourism and the financial sector.

A valid passport is required for entry, no special vaccination is required. The time difference to Europe is -6 h in winter and -6 h in summer.

The connection is mostly via USA, alternatively there is a direct flight from London to Nassau, which makes the arrival easier and within one day.

Worth knowing and places of interest

The Bahamas are a melting pot of cultures, a mixture of Native American, African and Caribbean influences as well as British traditions. Descendants of slaves who arrived on the islands during the Civil War in the United States make up the majority of the population. Music is ubiquitous - typical island sound is goombay with guitar, piano, brass, goatskin drums, rattles and bells. Over 80% of the inhabitants live on New Providence or Grand Bahama.

These northern islands, along with Bimini and Little and Great Abaco, are modern and American in character. Further south, Andros, Eleuthera, Cat Island, Exuma or Long Island have largely preserved their original character. The secluded islands reward their visitors with untouched nature, wonderful beaches and the impression of endless space.

The cuisine of the Bahamas consists mainly of sea food. Specialties are baked crab and conch, a large pink sea shell whose shell must not be exported. The best after a day at sea: Conch Salad, freshly prepared with onions, peppers, tomatoes or apples, chili, lemons and orange juice - accompanied by a cool Kalik, the national beer of the Bahamas!

Trade winds and the Gulf Stream determine the mild, subtropical climate of the Bahamas. The air temperatures are relatively constant with 22 to 28° C, so also the water with about 25° C is always warm enough for swimming and snorkeling. Short rain showers or thunderstorms can occur at any time of the year and hurricanes from June to November.

Mostly the trade wind dominates as a light to fresh breeze between 5 and 20 kn, in winter blowing from NE, in summer from SE. The tidal range is about 1 m and must be taken into account because of the many flats. In the sea straits there can also be strong currents.

The best sailing time is from December to April.

Cruise info Sea of Abaco (North of the Bahamas)

The starting port is Marsh Harbour, the commercial center on Great Abaco.

The most frequented cruising area is the Sea of Abaco on the Little Bahama Bank, almost always well protected from the force of the Atlantic by the countless cays and offshore reefs. It stretches about 85 nm northwest to Walkers Cay and about 20 nm south to Little Harbour, its location and short distances are ideal for relaxed power boating and sailing or a leisurely cruise, especially with children.

Modern infrastructure, the amenities of the American way of life as well as picturesque bays, crystal clear water, idyllic villages, long white sandy beaches and numerous anchorages make up the appeal of the area. The Abacos invite you to stay and enjoy between the sky and the sea.

Treasure Cay is one of the most popular resorts for golf and tennis, with a well-equipped marina as well as the most beautiful beach in the Abacos, with white powder-fine sand and the Coco Beach Bar & Grill. Swimming, clam digging, snorkeling and scuba diving are the order of the day everywhere, and the reefs teem with all manner of marine life, from parrotfish to napoleonfish and grouper.

On Great Guana Cay, drop anchor in charming, crescent-shaped Bakers Bay and make a pit stop at the legendary, brightly colored Nipper's Beach Bar & Grill, with a pool, spectacular ocean views and cool drinks - if you want to eat Pig Roast, you'll have to stop by on Sundays.

On the way to Green Turtle Cay, the sandbars between Treasure Cay and Whale Cay force a short passage on the Atlantic side, which - depending on wind and sea state conditions - is not always practical. Information on navigability as well as weather forecasts for the Sea of Abaco are available each morning on VHF channel 68.

Turtle Island, with its beautiful beaches and deep bays, is certainly one of the highlights of the Abacos. Anchor in White Sound, a protected natural harbor, or in Black Sound near New Plymouth. The town enchants with its small alleys and pastel-colored wooden houses, reminiscent of traditional New England towns, but with a Caribbean touch. We recommend a visit to the Albert Lowe Museum, which traces the history and development of the Abacos.

For the last night on board, Matt Lowes Cay, Man of War Cay or Hope Town on Elbow Cay are suitable. Built in 1862, the lighthouse rises some 40 meters above sea level and is one of the world's last manually operated lights. The climb is rewarded with a stunning panoramic view of the Sea of Abaco.

If you have sufficient nautical experience, know how to use tidal navigation and are confident of an open Atlantic passage, you can, with permission, undertake a longer trip to the south of the Bahamas, where countless enchanting anchorages, but hardly any marinas, await the guest. Here you are mainly on your own.

Afterwards, the passage on the open sea is scheduled to reach the islands on the Great Bahama Bank. It leads along the inhospitable southeast coast of Great Abaco to Hole in the Wall with crossing of the Great Bahama Canyon, which is about 30 nm wide.

First you reach the narrow and about 100 nm long main island Eleuthera or one of the islands offshore in the northern sector. If the anchorages at Royal Island or Russel Island are rather secluded, Spanish Wells, formerly used by the Spaniards to supply their ships with fresh water before returning to Europe, is today a center for lobster fishing and correspondingly busy. Harbour Island to the east, with Dunmore Town, the former capital of the Bahamas, offers several marinas and, otherwise unusual for the region, spectacularly shimmering pink sand beaches.

Eleuthera itself is known for the quality of its pineapples and offers some natural beauty as well as interesting diving and snorkeling. At the Glass Window Bridge, the dark blue Atlantic meets the calm turquoise waters of the Great Bahama Bank, a breathtaking spectacle. Anchoring in Hatchet Bay allows for visits to nearby caves.

The Leon Levy Native Plant Reserve in Governor's Harbor is home to native flora and the Haynes Library is considered a historic landmark. Tarpum Bay further south is the last fishing village on Eleuthera, and Rock Sound is home to Ocean Hole, which is connected underground to the sea and subject to the tide. Far south, on a rocky outcrop, Eleuthera Point Light House beckons with its long, pristine beach and magnificent views of the Atlantic Ocean.

Further to the Exumas, one can reach Powell Point to the west or the flax around Finley Cay to Beacon Cay. The island chain of 365 mostly uninhabited cays, lined up over about 105 nm like a string of pearls, can also be approached directly via the Fleeming Channel. Lonely, white beaches appear in clear contrast to the deep aquamarine or jade-green hues of the water - a paradise for sailing, snorkeling, diving and hiking. Rocks, blow and blue holes,caves, sand dunes, mangroves, shallow bays and reefs provide habitat for Bahamian tree rats, iguanas, land crabs, ospreys, conches, sea turtles, lobster, rays, corals and very rare biogenic sedimentary rocks called stromatolites.

The Exuma Cays Land & Sea Park, established in 1958 to protect this unique, remote ecosystem, extends between Normans Cay and Compass Cay. The park Visitor Center with dock for dinghies is located on Warderick Wells Cay, on a hill overlooking Powerfull Beach, which is guarded by the skeleton of a sperm whale. Anchoring or mooring on buoys is available.

Long Island is one of the most scenic and diverse islands in the Bahamas, with rolling green hills, fertile fields, banana and pineapple plantations, and shallow salt ponds. In the east, the island offers almost endless white sand beaches, while the west coast features rocky cliffs, shaped by the strong surf of the Atlantic Ocean. Columbus is said to have landed at the northern tip in 1492 on his voyage of discovery. Long Island is also known for its excellent diving sites, including Dean's Blue Hole, about 30 meters wide and the deepest in the world at 202 meters. In Clarence Town, St. Paul's Anglican Church and St. Peter's Church are worth a visit. 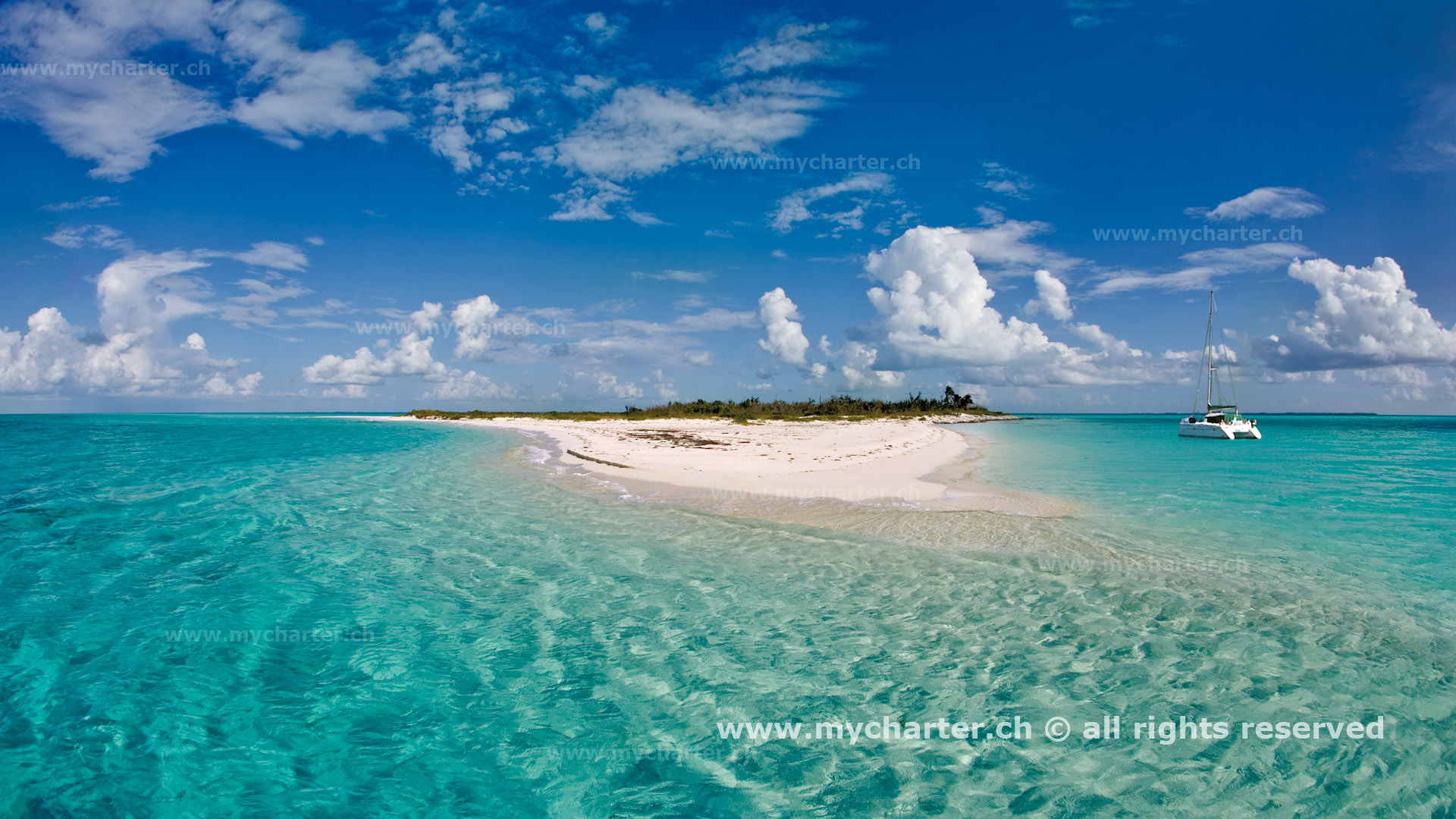 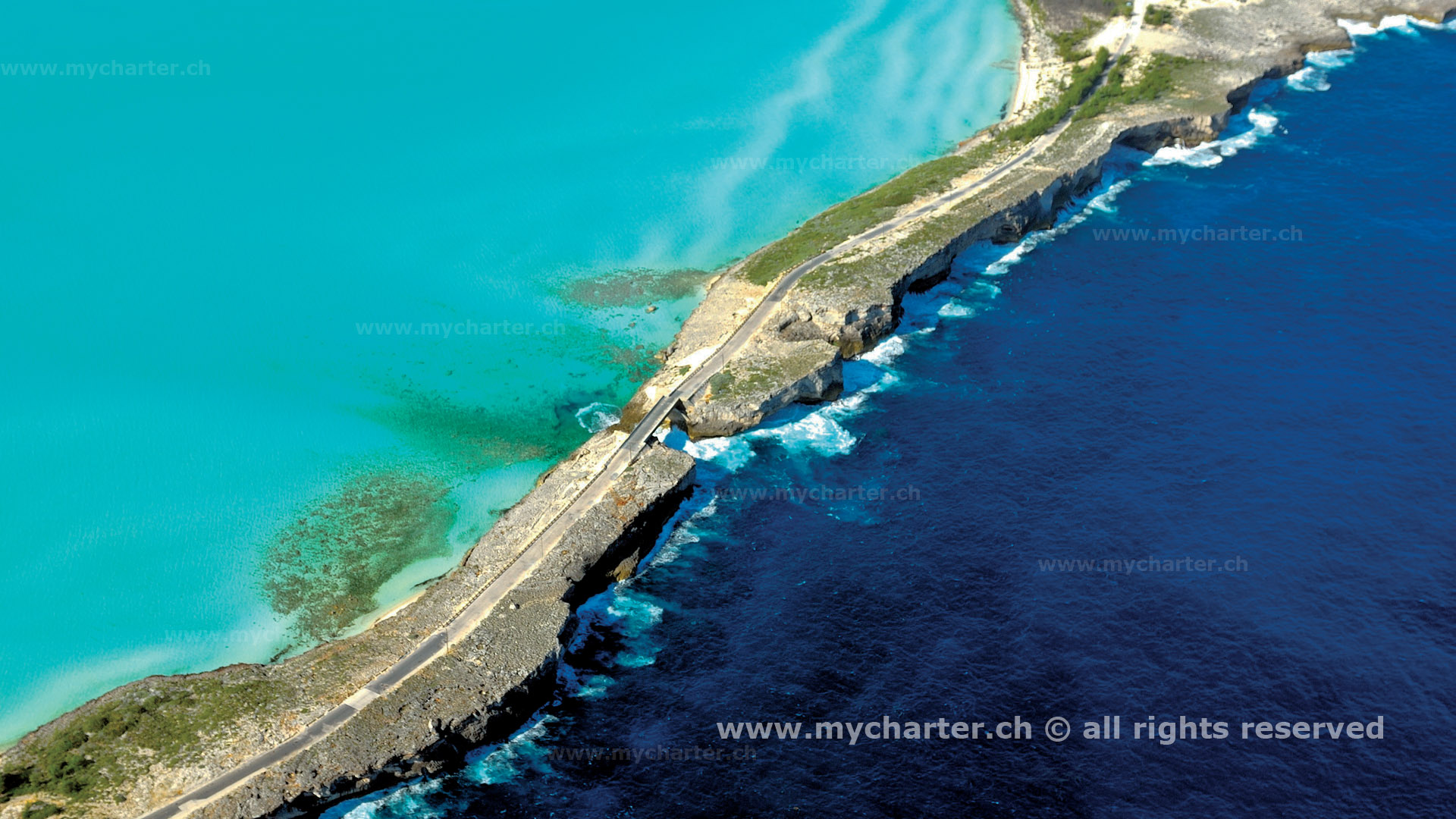 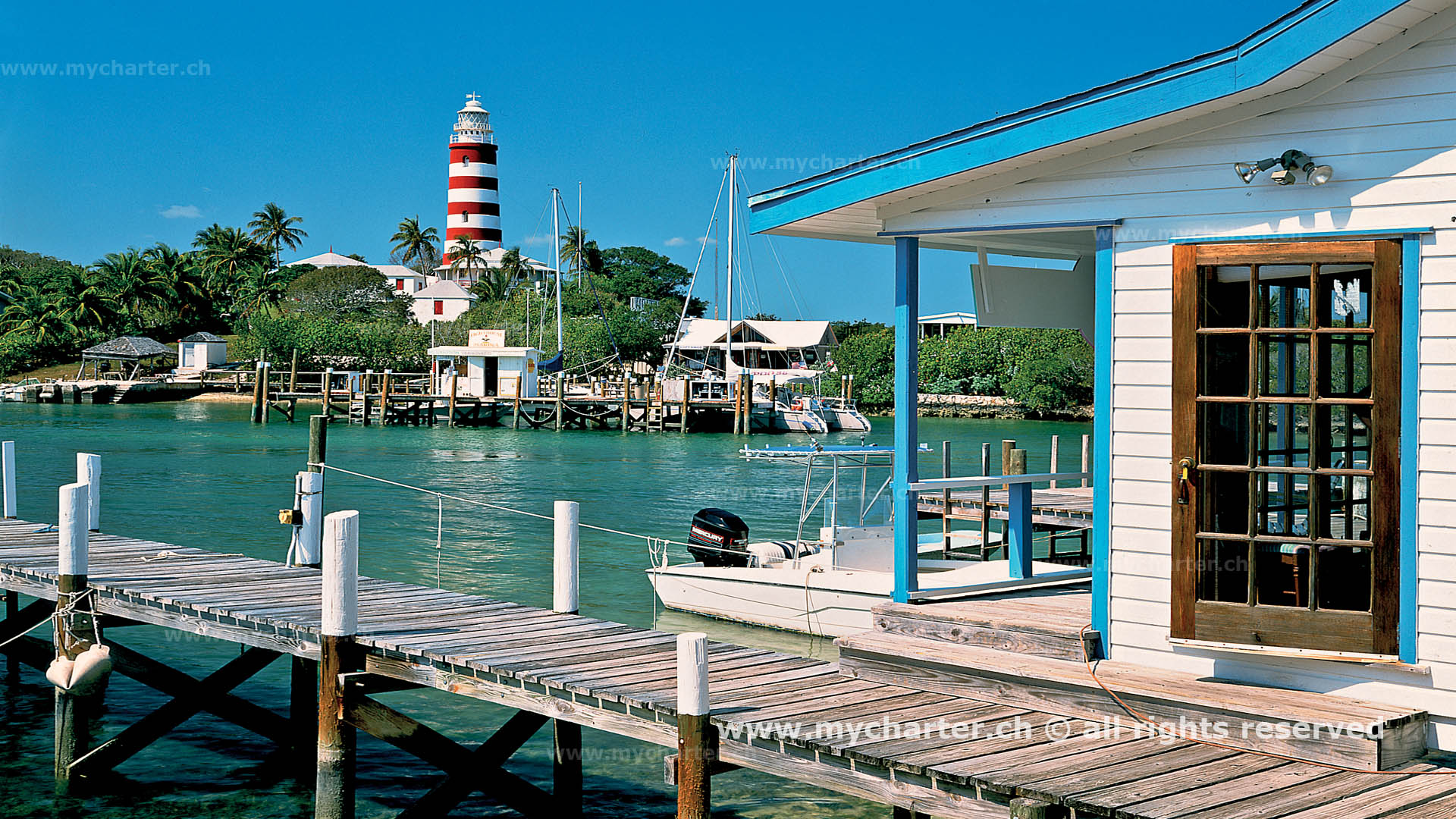 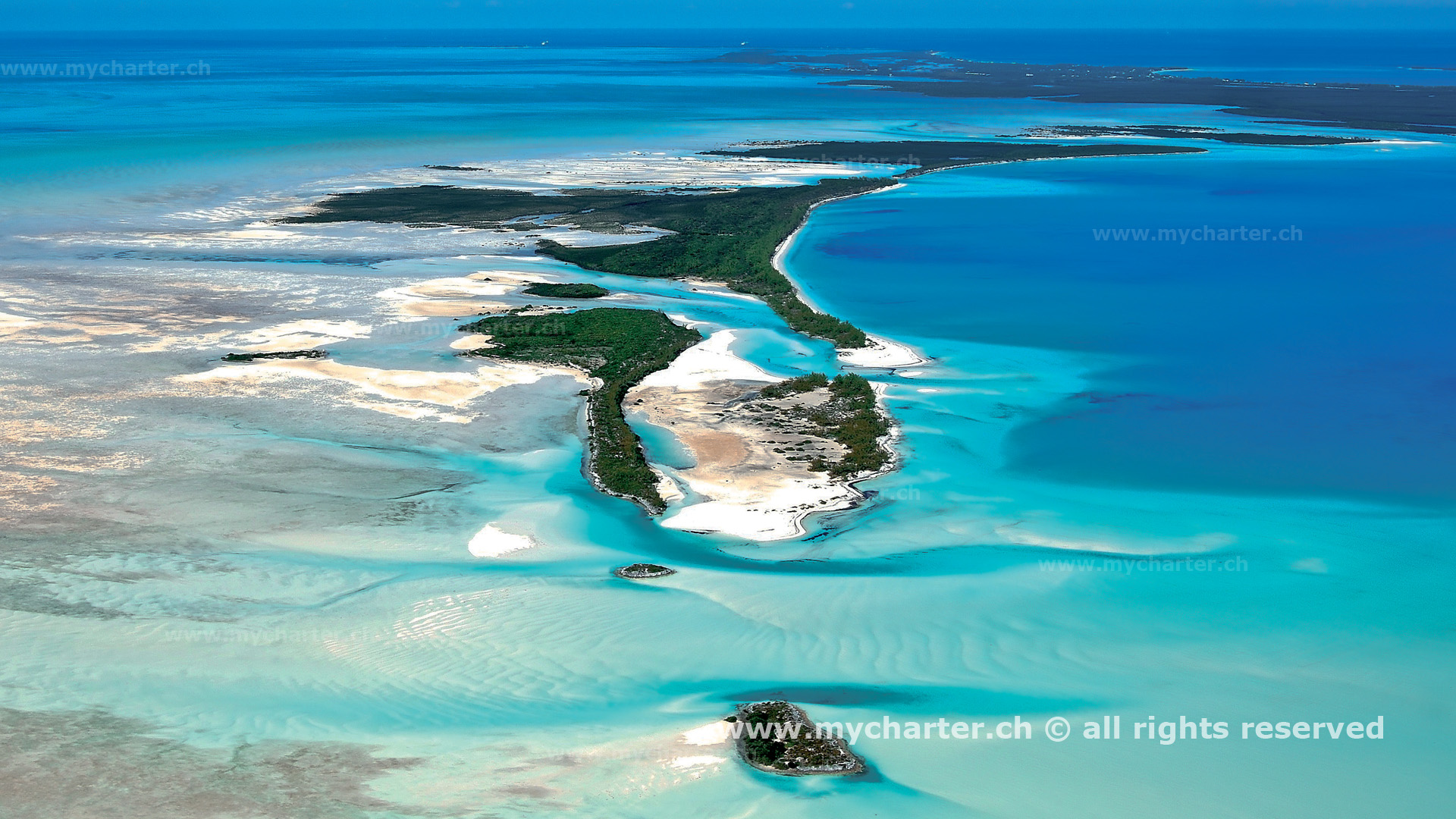 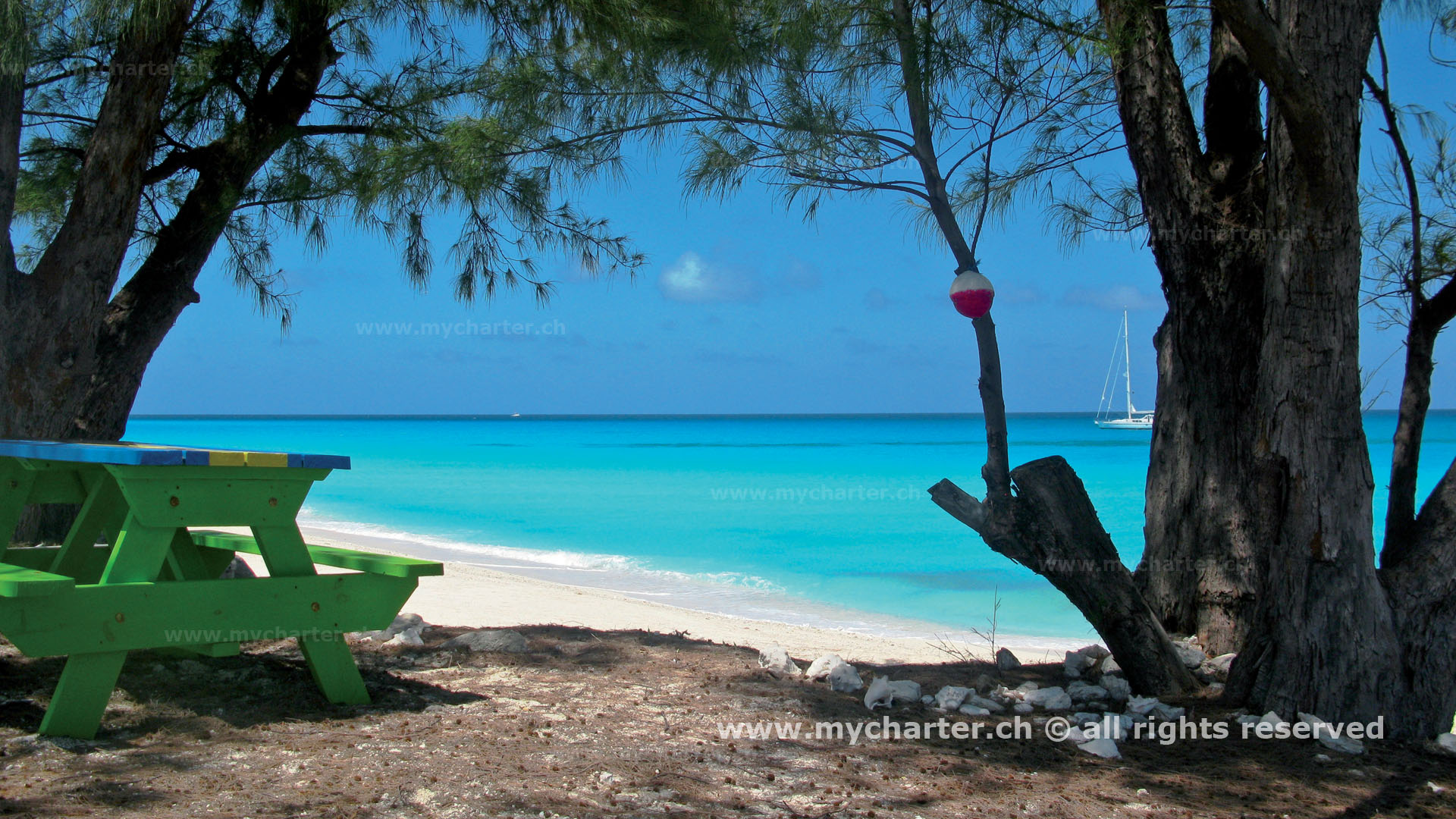 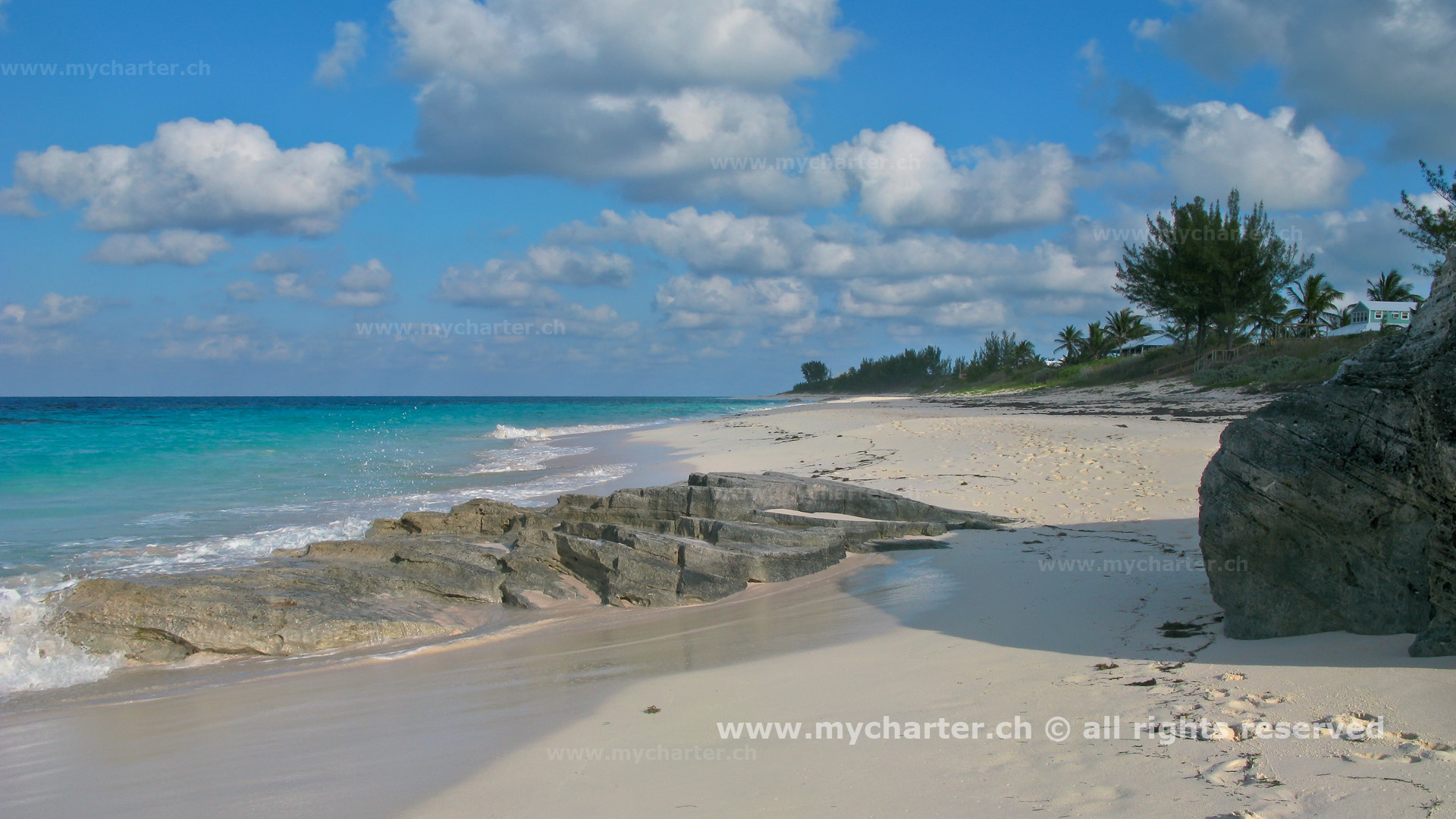 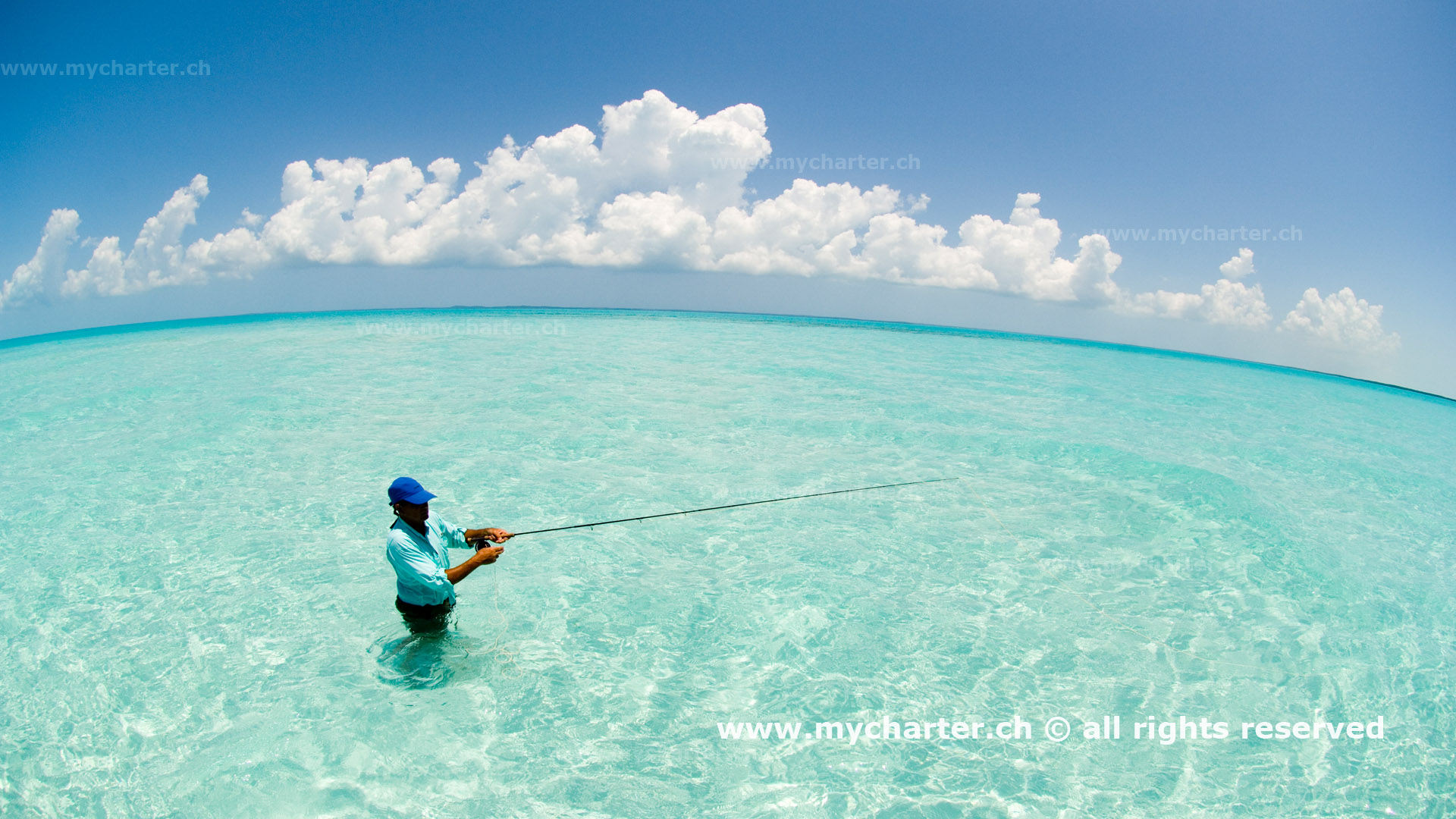 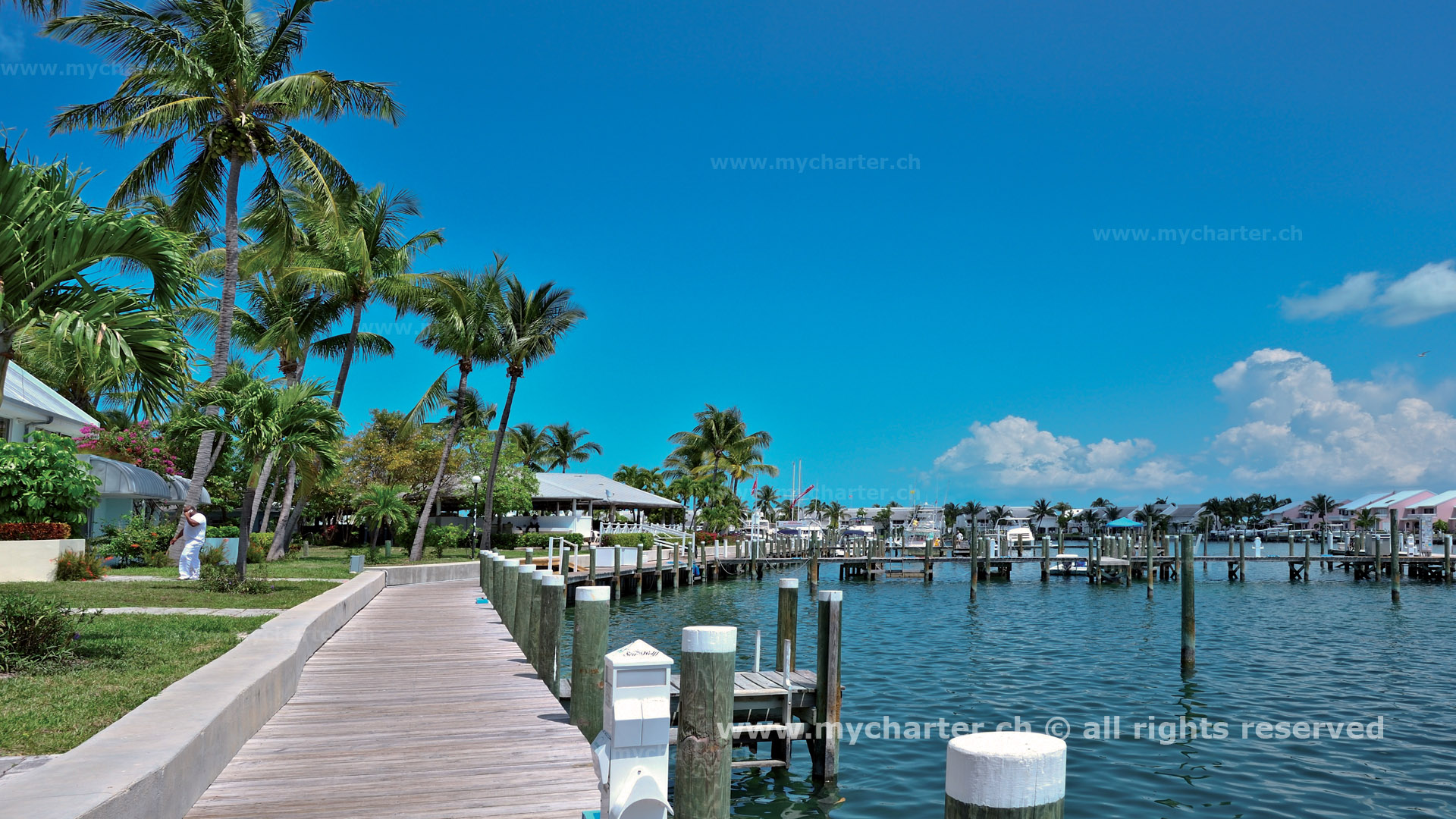 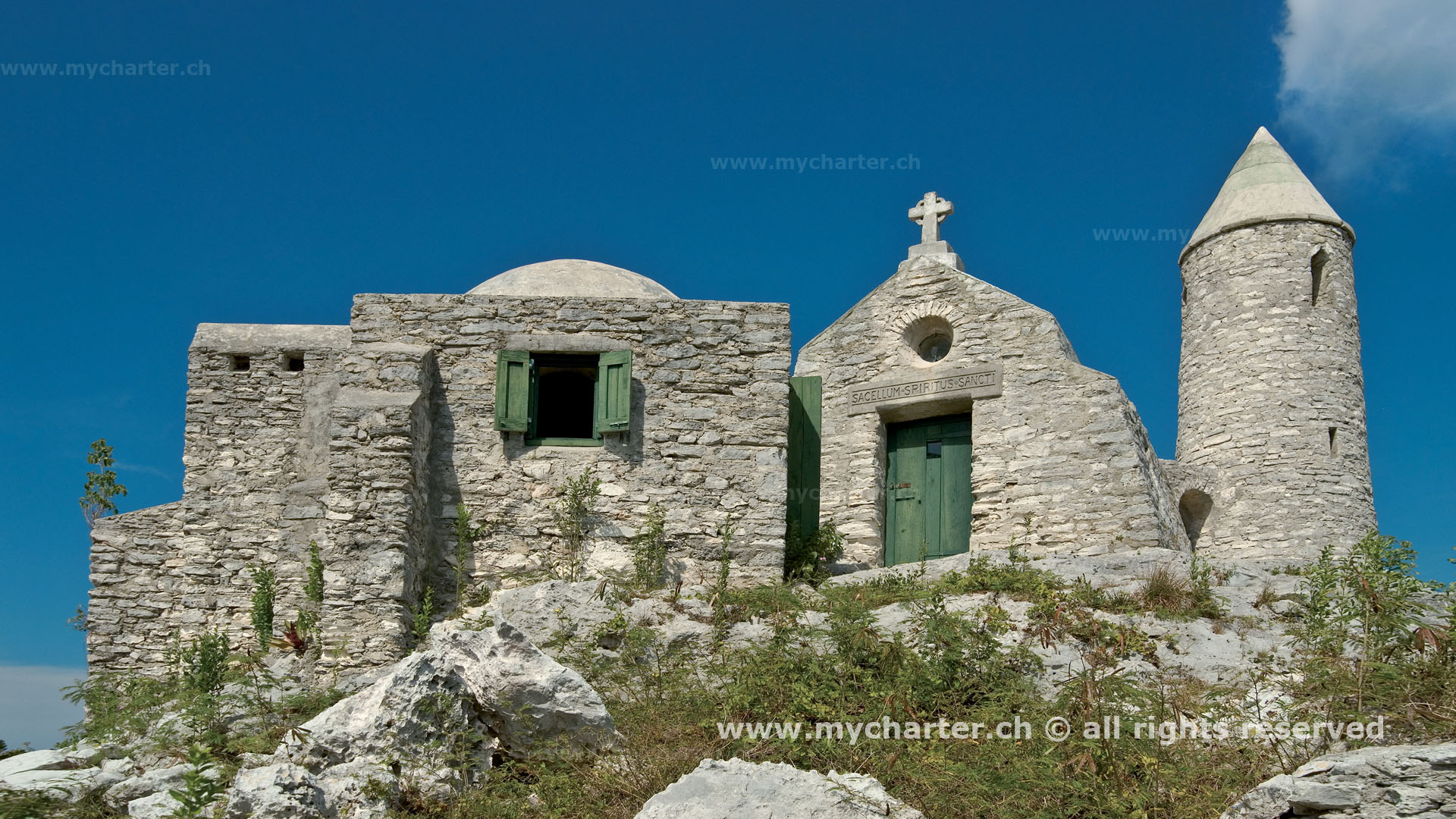 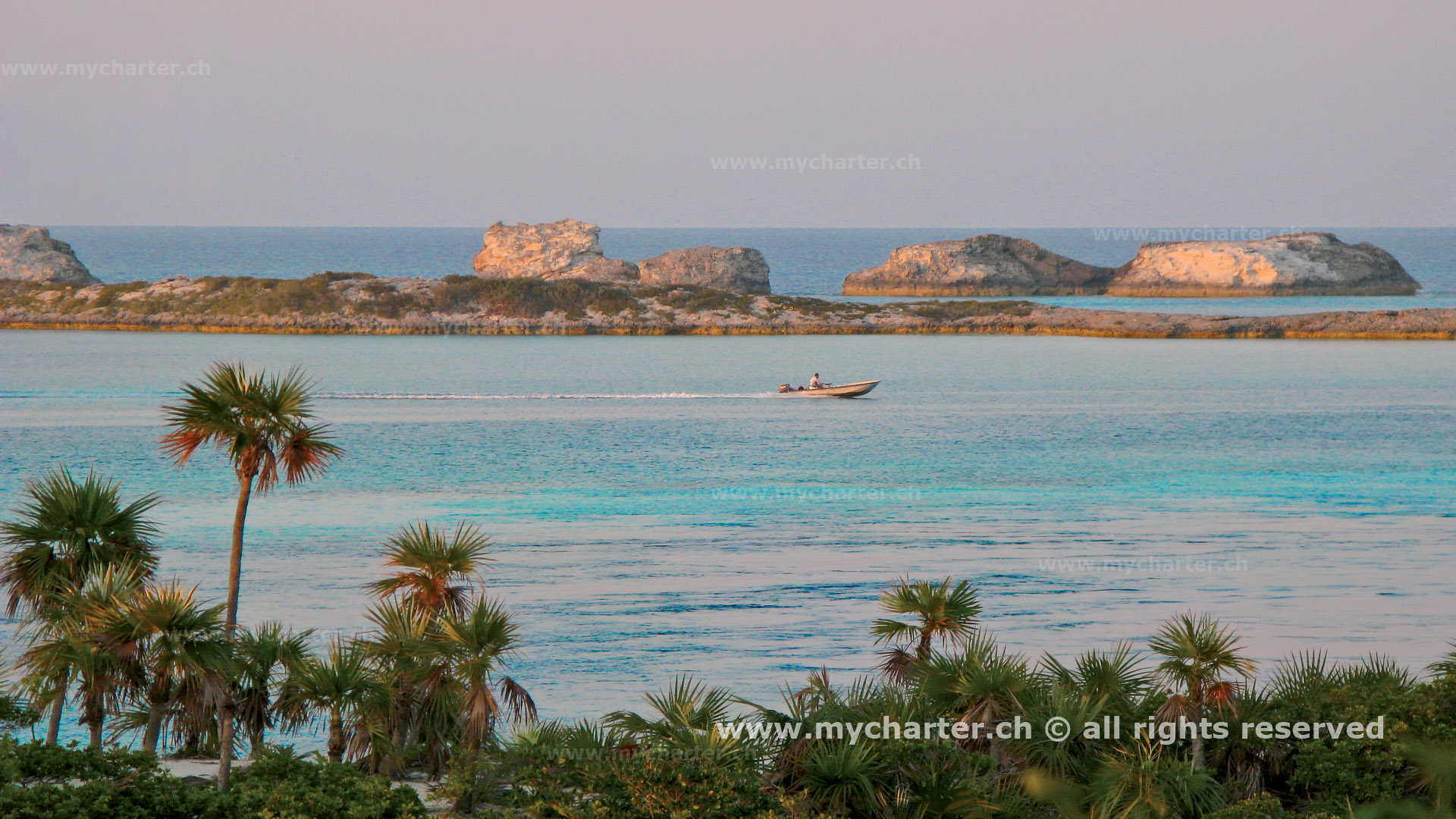 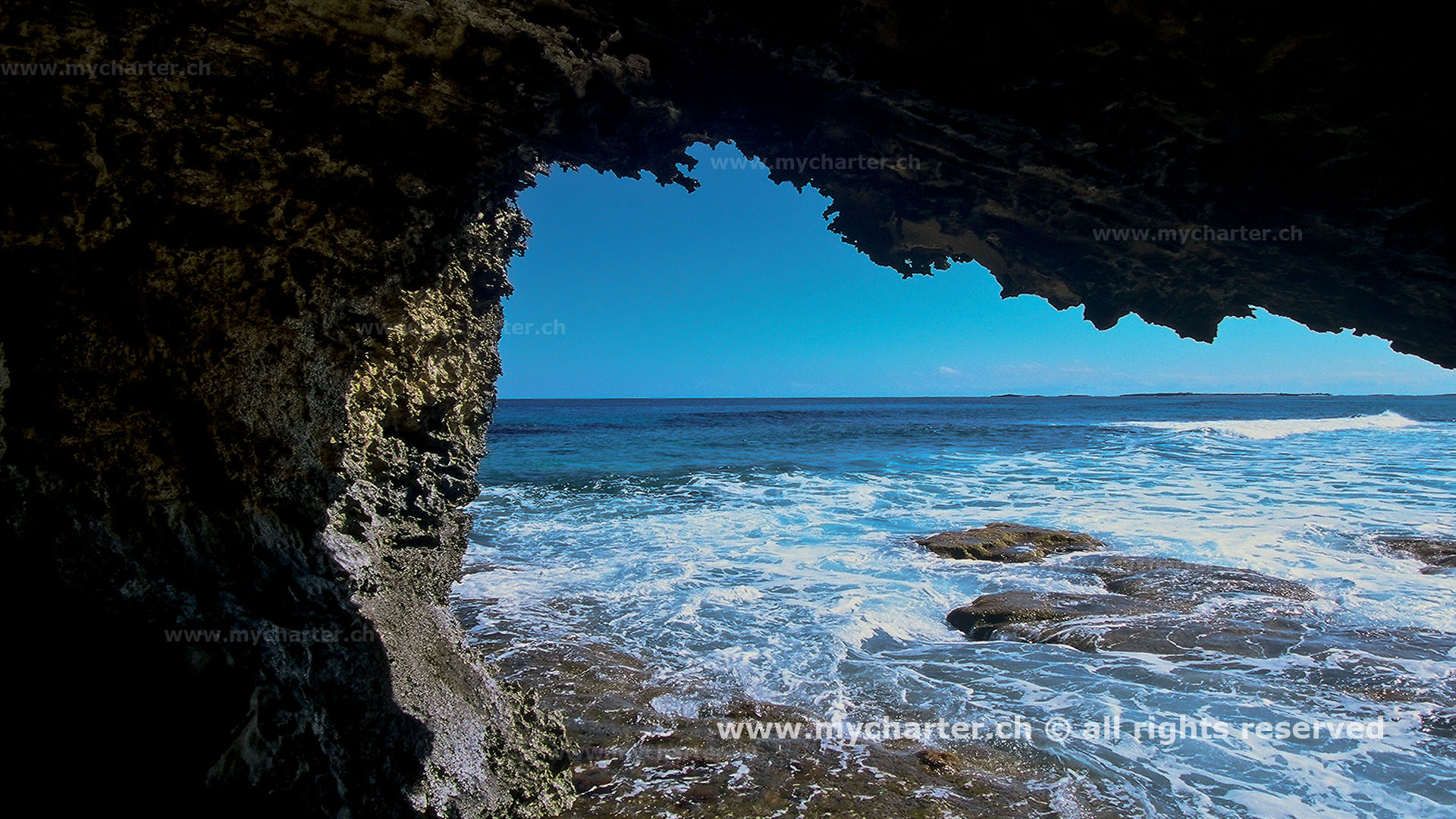 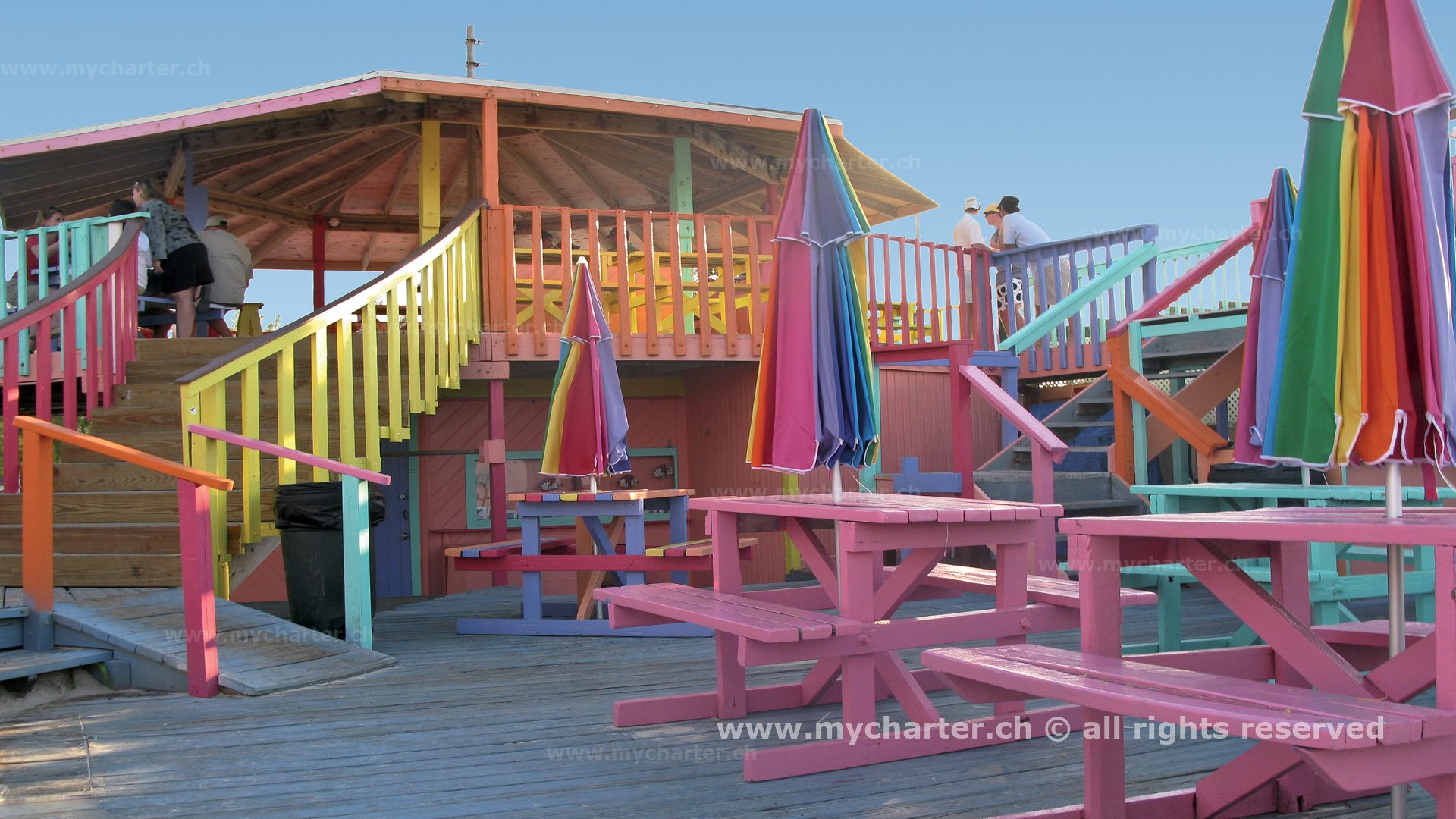 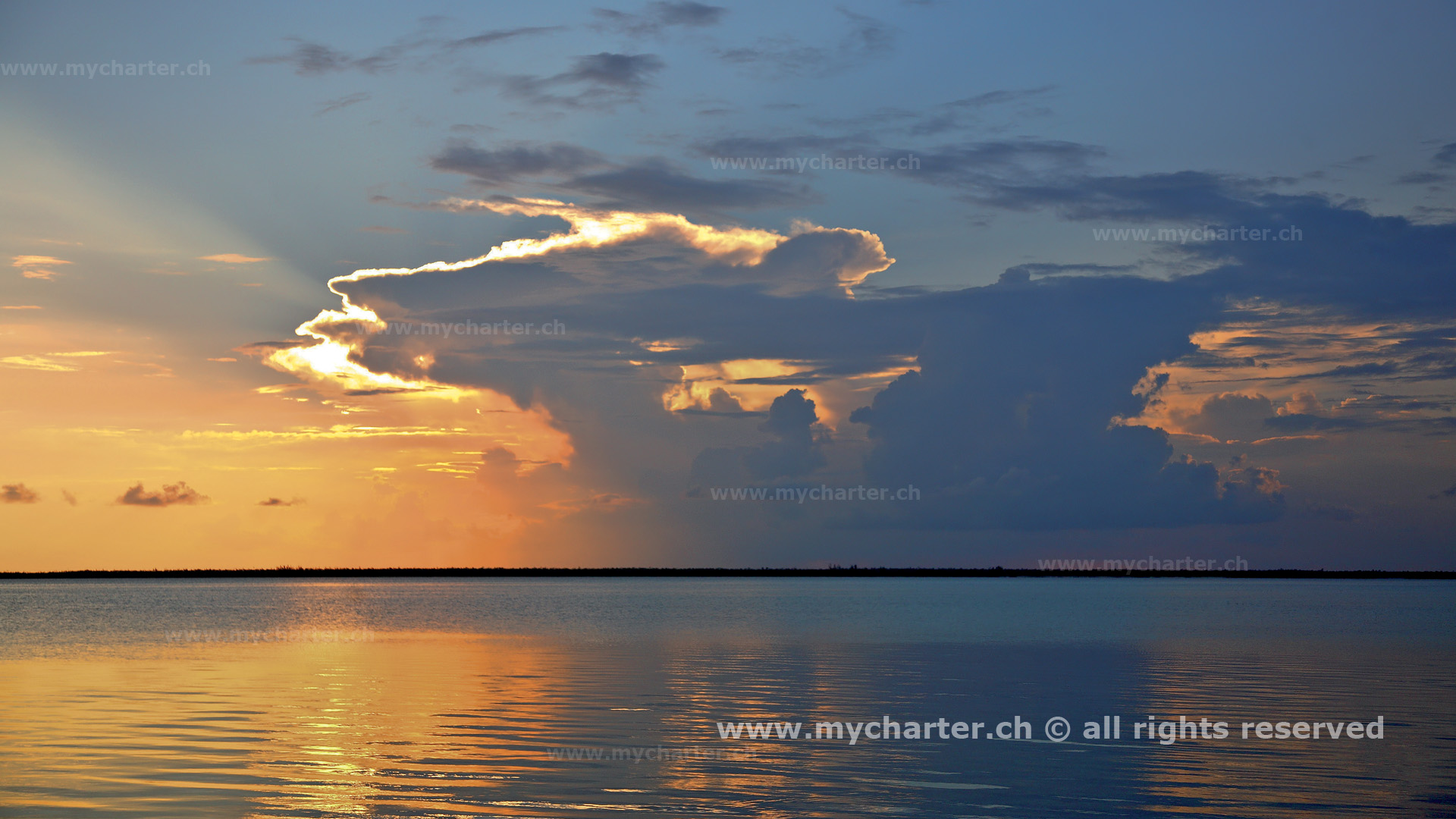 We would like to thank the Bahamas Tourist Board and the Bahamas Monistry of Tourism for their valuable support in producing the Yacht Charter Bahamas information.